A turret punch or turret press is a type of punch press used for metal forming by punching.

Punching and press work are especially suited for low to medium volume production runs. However the initial tooling costs, of both the machine and the job-specific press tool, are high. This limits punch work from being used for much small-volume and prototype work. A turret punch is one way of addressing this cost. The tooling of a turret punch uses a large number of standard punch tools: holes of varying sizes, straight edges, commonly-used notches or mounting holes. By using a large number of strokes, with several different tools in turn, a turret press may make a wide variety of parts without having to first make a specialised press tool for that task. This saves both time and money, allowing rapid prototyping or for low volume production to start without tooling delays. 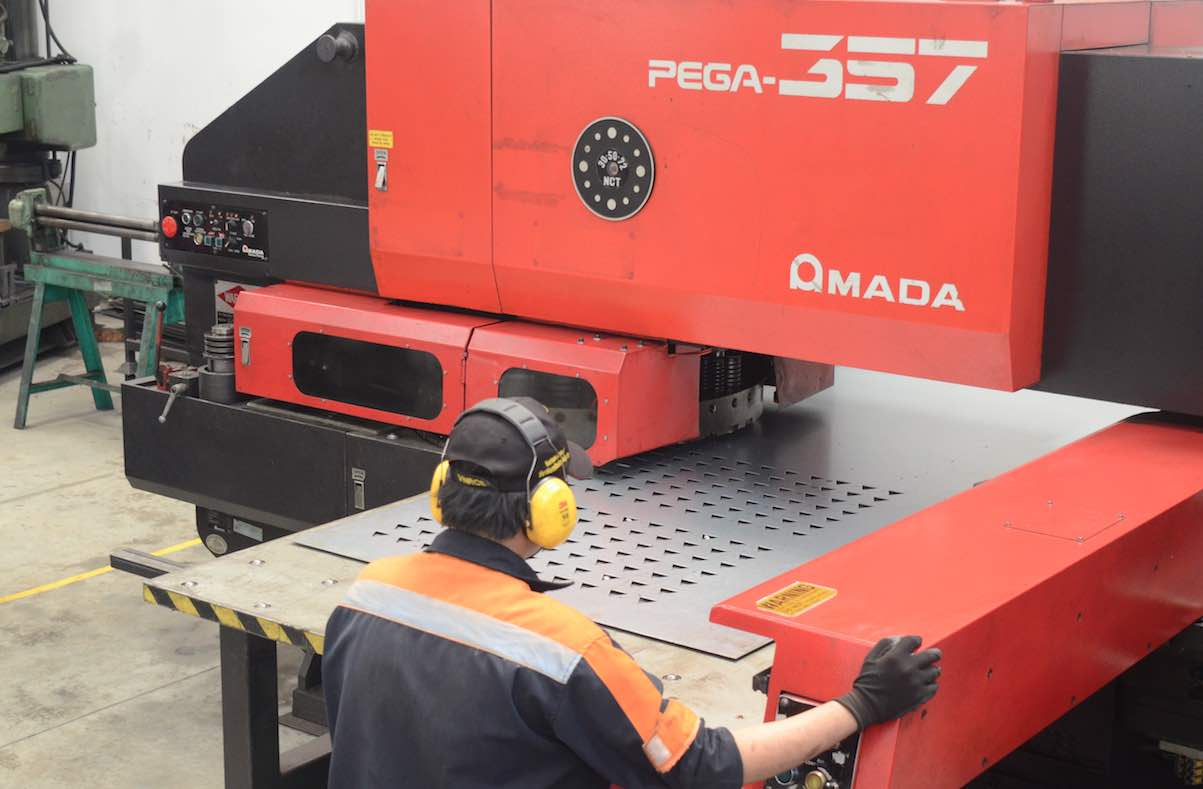 Most turret punches are CNC-controlled, with automatic positioning of the metal sheet beneath the tool and programmed selection of particular tools. A CAM process first converts the CAD design for the finished item into the number of individual punch operations needed, depending on the tools available in the turret.

CNC presses are the workhorse for “soft-tooled” manufacturing and are extensively used by users of PMA’s Metal Fabricating Division. Their flexibility and speed are continually being greatly improved, boosting the run numbers for which they are the most cost-effective choice when compared with dedicated stamping press tooling and processes.

Working speeds range from 80 to about 300 hits per minute (hpm). This evaluation is based on the one-inch movement of workpiece material in between each “hit” or work stroke.

In practice, the greatest functioning speeds are generally linked with intermediate-sized machines. The larger machines are typically run at less than maximum speed to preserve accuracy while conforming to the inertia of relatively larger and heavier tools and workpieces.

Machines are designed with either a Cframe or a bridge frame design. CNC presses deviate substantially in size and speed. The smallest, and thus least flexible of the bunch are those with 20 or fewer tools in the turret, 20 tons or less of press capacity and table size of 40 in. (1 m) square or less. 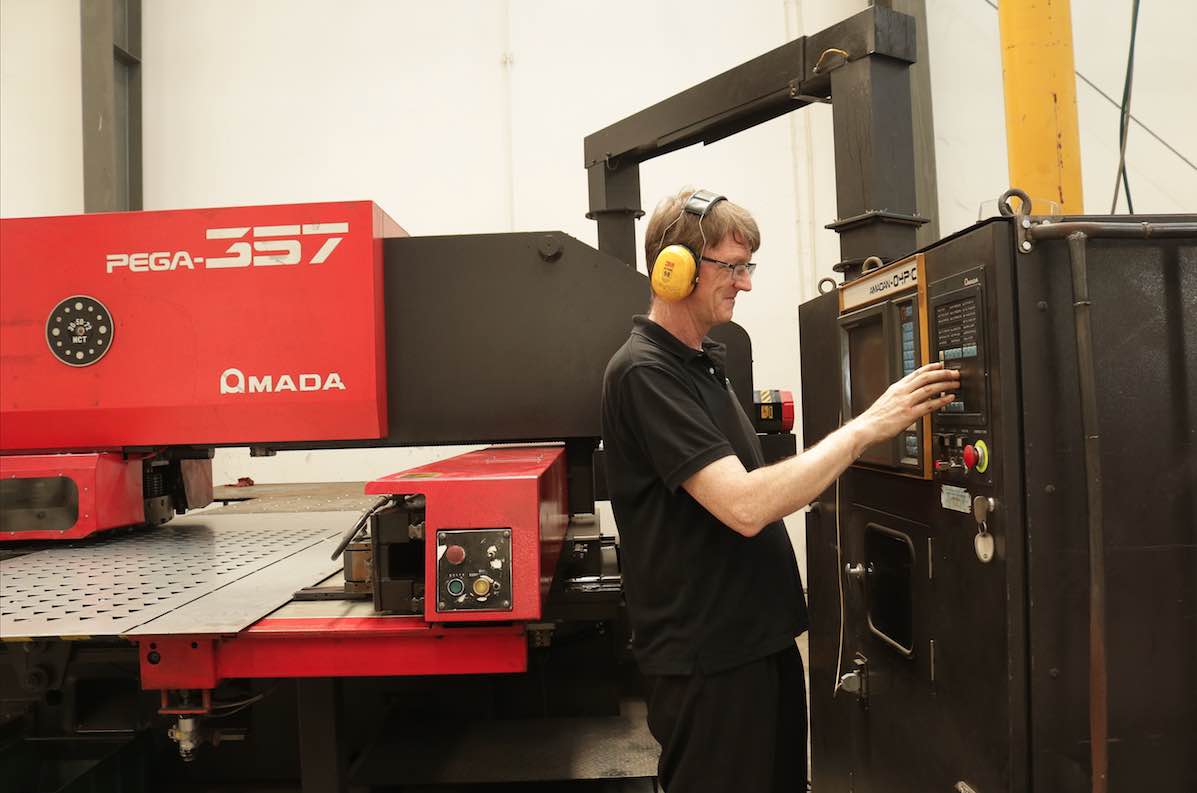 To understand clearly about metal fabrication, you can click here to see Three basic stages of metal engineering work

With the turret affixed in position to make sure precise positioning, the program triggers the ram, driving the punch through the workpiece. After the punch is pulled back, the machine is ready to prepare for the next hit.

Some turret presses are assembled so that the crankshaft is used to both depress and disengage the tool. In this situation, urethane strippers surrounding the punch are used to hold down the workpiece throughout movement of the tool.

Regardless of construction, size or speed, all turret presses function in the same way. A sheet of workpiece component gripped at the edges by workholders, is moved across the table into position in between the upper and lower portions of the turret by motion of two precision lead screws (one in the X-axis, the other in the Y-axis). Meanwhile, the turret revolves until the necessary punch and die set in place.

Other machines are developed to disengage the tool by spring motion rather than with the ram. This needs a separate punch holder and allows for strippers of metal rather than urethane. Metal strippers can hold the workpiece more tightly, especially during forming operations.

CNC Laser Cutting Services is also one the most common processes used for industrial fabrication applications, click here to find out what it is

Nibbling, compared to processing with a singular punch or unique tool, has constraints regarding preciseness which the professional should keep in mind. Since a dimension of a nibbled attribute is impacted twice by the punch (once on each side of the element), twice the normal punch resilience is appropriate.

The exact number level at which specific tooling becomes more cost effective depends on several variables, but in many cases requires several thousand of parts. In general, parts with highly irregular outer contours or large central holes– which demand long machine functioning time for the turret press– reach the cross-over point for specialized or “hard” tools at reasonably lower quantities.

Severe flexibility of over-all part dimension is another perk of CNC press production. In practical terms, the throat depth of the machine restricts the over-all part size in the Y direction of the machine, though it is achievable to reposition the part in the X direction during processing to produce a greater length. (Since each repositioning calls for added tolerance, only one repositioning per part is recommended.).

Advantages and Limitations of the CNC Turret Punch

The prospect to improve part appearance and precision with inexpensive specific tools in the turret press is in some cases overlooked. Mainly where nonstandard designs and components are concerned, the manufacturer is likely to advise the selective use of particularly shaped tools. Special tools, appropriately designed and used, can considerably improve dimensional control while minimizing burrs and improving feature appearance.

Certain design functions make the CNC press a prospect for better quantity manufacturing runs. For example, firmly spaced hole patterns and louvers as generally used for ventilation purposes, may require the use of two or even three progressive stations in a tough tool die to space the openings– at substantial added cost. This added tooling cost presents the CNC press its economical quantity strength in this example.

The CNC press pairs the distinct benefit of highly flexible manufacturing of prototypes with rather inexpensive manufacturing quantities. This is due to the extraordinary variety of standard punch configurations offered which makes the cost and lead time connected with special tooling not needed.

Another perk of CNC press processing is the incredible design versatility in configuration and size of features within the part. Newer machines, particularly models with indexable tool stations, make the nibbling of very large and complicated features a practical reality.

WHAT IS THE DIFFERENCE BETWEEN SOLDERING, WELDING AND BRAZING?