CNC Laser cutting is a modern technology that works with a laser to cut materials, and is commonly used for industrial manufacturing applications, but is also starting to be used by programs, small businesses, and hobbyists. It works by routing the output of a high-power laser most commonly through optics. The laser optics and CNC (computer numerical control) are used to point the material or the laser beam generated.

A typical industrial laser for cutting materials consisted of a motion management system to follow a CNC or G-code of the pattern to be cut onto the material. The targeted laser beam is guided at the material, which then either melts, burns vaporize away, or is blown away by a jet of gas, keeping an edge with a high-quality surface appearance. Industrial laser cutters are used to cut flat-sheet material as well as structural and piping materials. 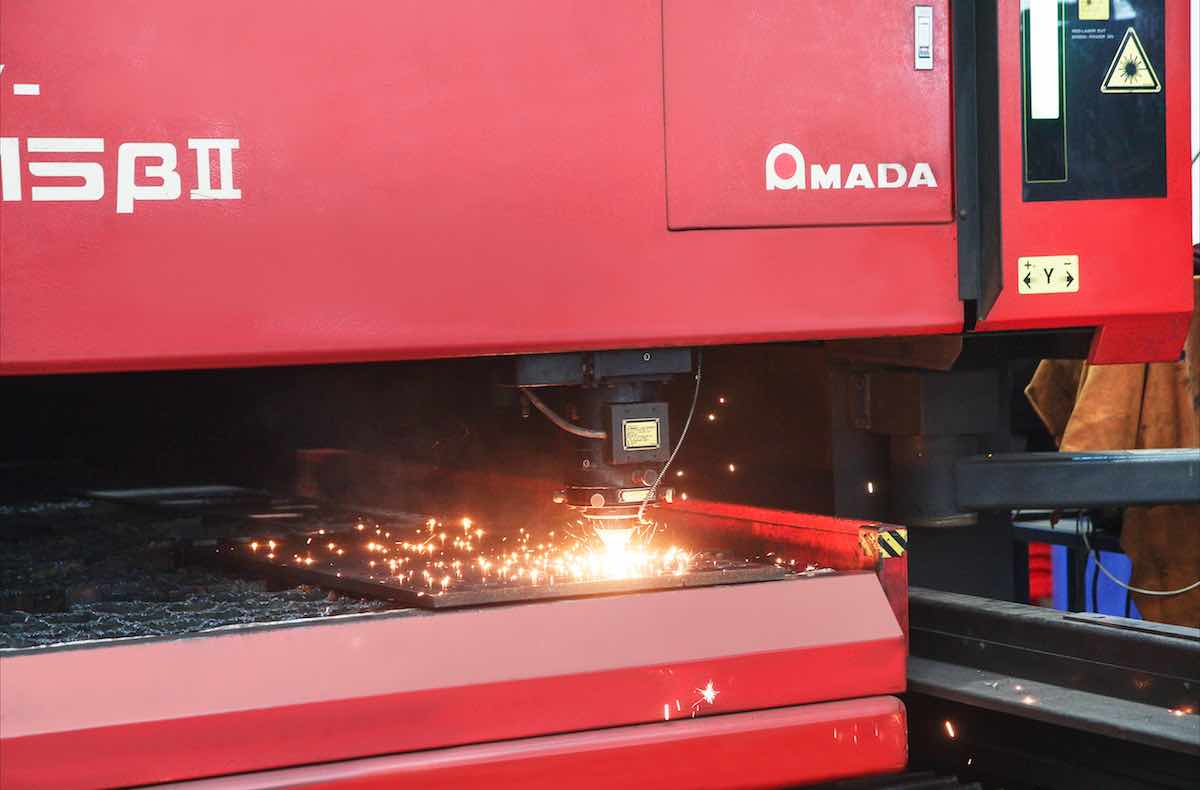 In 1965, the original production laser cutting equipment was used to drill holes in diamond dies. This machine was made by the Western Electric Engineering Research Center. In 1967, the British pioneered laser-assisted oxygen jet cutting for metals.

In the early 1970s, this technological innovation was put into development to cut titanium for aerospace applications. At the same time CO2 lasers were modified to cut non-metals, such as fibers, because, at the time, CO2 lasers were not strong enough to overcome the thermal conductivity of metals.

Just getting started? Begin your knowledge journey with article: "3 basic stages of metal fabrication" before reading the following section.

Industrial laser cutting of steel with cutting directions programmed through the CNC interface.

Advantages of CNC laser cutting over mechanical cutting, including being more accurate, utilizing less energy when cutting sheet metal, much easier work holding and reducing contamination of workpiece (since there is no cutting edge which may become contaminated by the material or taint the material). Accuracy may be better since the laser beam does not wear during the procedure. There is also a reduced possibility of warping the material that is being cut, as laser systems have a tiny heat-affected zone. Some materials are also very difficult or tough to cut by more ordinary means.

However, most industrial lasers can not cut through the greater metal thickness that plasma can. More recent laser machines functioning at higher power (6000 watts, as contrasted with early laser cutting machines’ 1500 watt ratings) are moving toward plasma machines in their capacity to cut through thick materials, but the capital cost of such units is much higher than.

The parallel rays of coherent light from the laser source often fall in the range between 0.06– 0.08 inches (1.5– 2.0 mm) in diameter. This beam is typically focused and magnified by a lens or a mirror to a very tiny spot of about 0.001 inches (0.025 mm) to create an extremely intense laser beam. To reach the smoothest attainable appearance during contour cutting, the path of beam polarization must be revolved as it goes around the periphery of a contoured workpiece. For sheet metal cutting, the focal length is usually 1.5– 3 inches (38– 76 mm).

Mirrors or fiber optics are usually used to direct the coherent light to a lens, which concentrates the light at the work zone. The narrowest part of the centered beam is less than 0.0125 inches (0.32 mm). in diameter. Depending upon material thickness, kerf widths as small as 0.004 inches (0.10 mm) are possible.

In order to be able to start cutting from somewhere other than the edge, a pierce is done before every cut. Piercing normally involves a high-power pulsed laser beam which slowly makes a hole in the material, requiring around 5– 15 seconds for 0.5-inch-thick (13 mm) stainless steel, for example.

Generation of the laser beam entails stimulating a lasing material by electrical discharges or lamps within a closed container. As the lasing material is stimulated, the beam is reflected internally using a partial mirror, up until it obtains appropriate energy to escape as a surge of monochromatic coherent light.